​My father, Eliot Freidson (1923-2005), always seemed to me to be larger than other fathers despite his diminutive stature. His intellect was formidable and he was not always easy to have as a father, but I still miss him every day. In 2017, I completed a project to celebrate one of his greatest gifts to me.

My dad loved to go fishing and he was generous in sharing that love with me. When I was small, the two of us would get up while it was still dark, dig some nightcrawlers from the backyard, and he would drive out to Lake Hopatcong where we would fish all morning for sunfish and perch.  Later, during our interminable, summer family camping trips in the Adirondacks, he and I would get up at dawn to fish Indian Lake where we would occasionally catch a pike or pickerel, and more often just a mess of perch to fry up for breakfast. And still later, after he bought a summer house in Sag Harbor, he would pilot his Boston whaler into the Great Peconic Bay to fish for bluefish, spanish mackerel and striped bass, sometimes allowing the fish as much as half an hour to bite.

From my father, I learned the joy of preparing for a fishing trip and the thrill of bringing the catch in. I learned to bait a hook, to cast, to be patient (sort of), to clean my catch and to savor the taste of my own labors, being careful never to catch more than I could eat. And I learned that my accomplished, restless father was his most relaxed and happy when near to the water, that he was attuned not only to the fish but to the shorebirds and the insects, and that even he could not always make the fish bite. A fishing trip without a catch might be somewhat disappointing, but it was still worth the trouble.

I made each of my 75 little ceramic fish in a press mold and then slapped the two sides together to form a hollow fish with a little surprise inside.  They hang on the walls of my home, reminding me of the special days I spent with my father throughout his life. 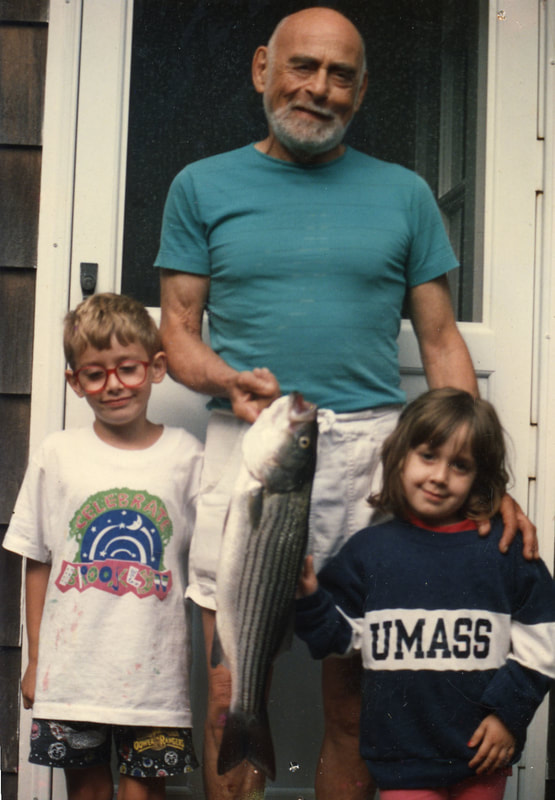 Eliot Freidson with his grandchildren and a lovely striped bass caught in the Great Peconic Bay, NY